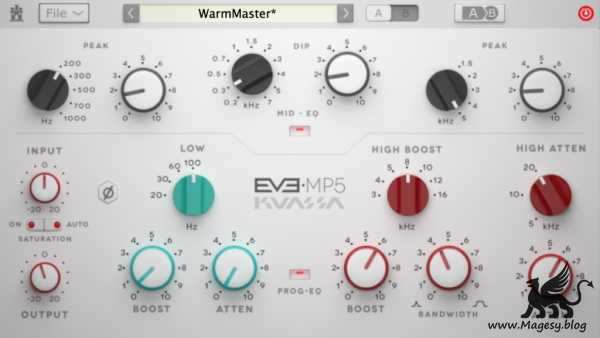 Inspired by the Legendary for the Modern Age

Inspired by the Pultec* MEQ-5 and EQP-1A combined into a single, compact plugin. A unique saturation feature with intelligent level compensation. Perfect for adding grit to basslines, making vocals stand out in the mix, or instant mojo for anything. Also works great for mastering! Authentic frequency response. Experience the Pultec* specific tricks with a modern twist. Introducing the newest addition to the Extensive Vintage Equalizer family: EVE-MP5. EVE-MP5 is a reproduction of two of the most sought-after classic hardware equalizers, the Pultec* MEQ-5 Midrange Equalizer and the EQP-1A Program Equalizer. We drew inspiration from them and combined both EQs into a compact, single plug-in with a color coded, straightforward interface intended for fast workflows and maximum usability.

Known for their signature frequency curves, the EVE-MP5 will bring massive lows, smooth mids and shiny highs to any tracks you put them into. Utilize the famous low-end trick of boosting and attenuating the low frequencies simultaneously for a rock solid bottom-end. The MP5 is also loaded with a power amp saturation unit in the signal path. Turn it on for a hotter signal and dial the input to give a mild edge to your tracks, or push more for an overdriven sound. The “Auto” switch in the input section is useful for maintaining constant gain levels while cranking the saturation via the input knob.