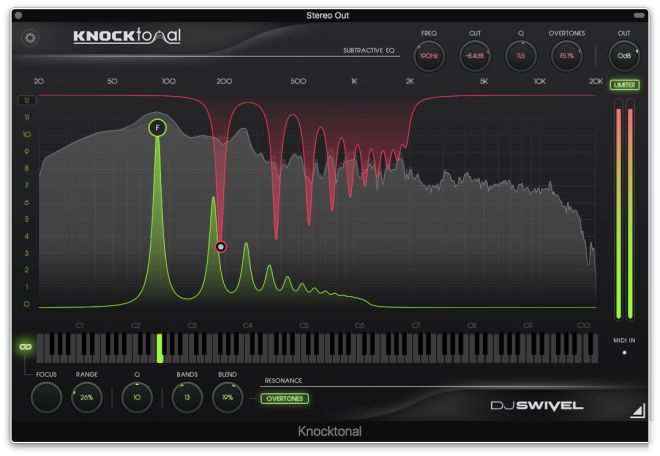 Knocktonal is a note-based resonance enhancer, allowing users to boost (or cut) resonances as well as their corresponding harmonic overtones. Simply put, Knocktonal allows drum tuning via eq, without the need for re-pitching samples. This can be quite useful, as destructive re-pitching or pitch shifting will often affect the tonality of sounds in negative ways. This may include unwanted augmentation of the transients, texture, attack, and decay of your sounds. Knocktonal allows these resonance boosts/cuts to be controlled statically, or dynamically with either automation or MIDI input, the latter of which can create some incredibly unique sounding melodic pitch augmentation. Knocktonal can also be used to turn simple drum sounds like short kicks, into 808’s with a long tail by narrowing the resonance Q control (#10 on plugin overview). All plugin controls have hints that will display as popups when a mouse is hovered for 2 seconds.

SUBTRACTIVE EQ
The subtractive EQ section of Knocktonal is designed to remove any unwanted resonating frequencies that pre- exist in the audio you’re working with. This is useful in order to achieve a “blank slate”, before enhancing any new resonances. As with the additive resonance section of the plugin, the Subtractive EQ can be controlled in several ways. First, statically, by simply setting the note and leaving it. This is useful for one-shot drum sounds that are identical throughout the performance. The subtractive EQ can also be controlled dynamically for sounds that have shifting resonances, such as a melodic performance. This can be done in two ways. First, by using automation, and second, by sending a MIDI signal to MIDI Channel 2 of the plugin.

RESONANCE EQ
The resonance EQ section is where the power of Knocktonal really shines. This is the primary place where usage will occur. The resonance EQ is designed to push a root note, and all accompanying harmonic overtones, both even and odd. You can also set the resonance EQ to Octave mode by turning off the Overtones button, which allows control over all octaves of the root note. As with the subtractive EQ, the additive resonance EQ can be controlled both statically, and dynamically via automation or MIDI input.