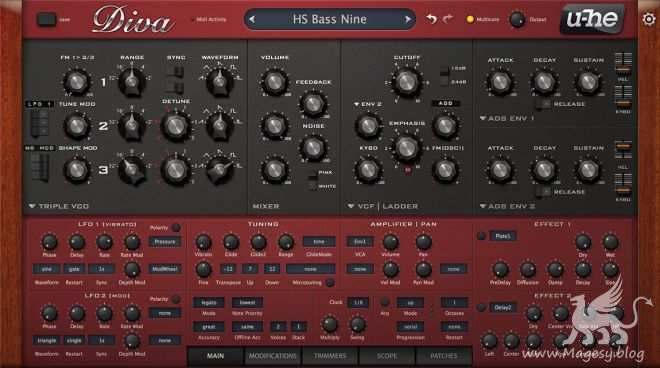 The Spirit of Analogue

DIVA – Dinosaur Impersonating Virtual Analogue Synthesizer. The oscillators, filters and envelopes closely model components found in some of the great monophonic and polyphonic synthesizers of yesteryear. Modules can be mixed and matched so you can build hybrids, but what sets DIVA apart is the sheer authenticity of the analogue sound. This comes at the cost of quite a high CPU-hit, but we think it was worth it: Diva is the first native software synth that applies methods from industrial circuit simulators (e.g. PSpice) in realtime. The behaviour of zero-delay-feedback filters when pushed to the limit clearly demonstrates the advantages of this groundbreaking approach.

Why She’s Hot!
– authentic, unrivaled analogue sound
– up to 40% less CPU-hit than version 1.0
– multithreading support for modern CPUs – more polyphony, less overload
– even bigger library of gorgeously organic presets
– resizable editor window, alternative skins available shortly
– the essence of 7 or 8 vintage synths for about 1% of the cost
– …and so much more!